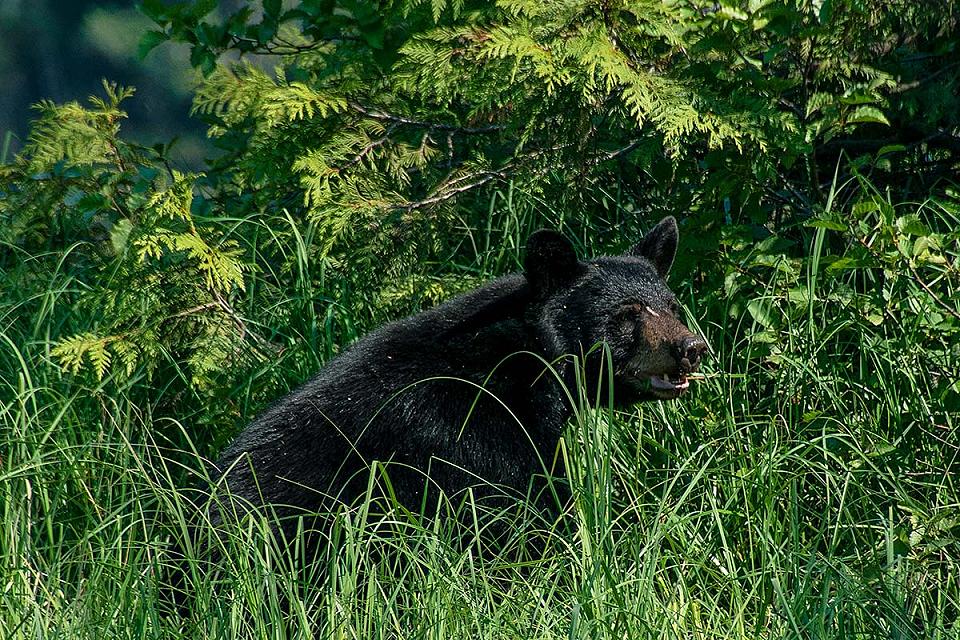 At least once a year, we like to share information about bears - specifically, the black bears that live in the Great Smoky Mountains. This is an important subject, because as tourism has grown in the Smokies over the years, so has the number of incidents of interaction between bears and people. Sometimes, these encounters have resulted in harm, and even death, to humans. But more often than not, they spell trouble for the bears involved. In some cases, they can even lead to the animal's death.

While we can't always control bear behavior in the wild (and in developed areas that bears wander into), we do have control over how we as human beings interact with the bear population. By following guidelines from the national park service and other conservation organizations, we can take steps to minimize our impact on the well-being of black bears in the Smokies.

Many of these issues stem from the feeding of bears. Over the years, there have been more and more sightings as bears wander out of the national park and into developed areas in pursuit of food. The problem with feeding bears is that it teaches them to encroach on human territories, and it makes them more dependent on humans for food.

And as more and more bears have entered our residential and commercial areas - or even as we people have inadvertently given bears easier access to our food inside the national park - the higher the risk of a dangerous encounter. Whether it's a bear encroaching on a campsite in search of food or a tourist feeding human food to a bear on the Cades Cove loop, this behavior ultimately reinforces the bear's reliance on people for sustenance.

This can lead to dangerous situations. Recently, one black bear died when it entered an automobile in search of food, got trapped inside and ultimately died. Bears that attack people inside the national park in food-related incidents are often put down.

What can we humans do? DON'T FEED THE BEARS. It's a cartoon cliché, but it's based on facts. Also, when camping, place all your garbage in bear-proof trash containers and never store your camp food in easily accessible areas. The best option is to lock stored foods inside your vehicle, never your tent. Bears can smell these foods from long distances away, and a flimsy tent is no protection from a wild animal.

Sometimes, though, humans and bears can cross paths in the most innocent of situations, such as when we're hiking or driving in Great Smoky Mountains National Park. It's common, for example, for auto traffic in Cades Cove to come to a standstill when a mother bear and her cubs are sighted. However, too often, tourists eager to get a great photo get way too close to the bears. A mama bear who feels her cubs are being threatened could possibly attack to protect them. Or a hiker on a trail might accidentally stumble across one or more bears just living their lives.

In such cases, the best protocol is to keep as much distance as possible between yourself and a bear. If a bear notices you and changes its behavior - such as feeding or changing the direction it was moving - that means you're too close. Back away slowly from the bear and make lots of noise. And this is all not just a matter of etiquette. If you're within 150 feet of a bear and it changes its behavior, that's actually against the law.

Although it goes against our own human instincts, never turn your back to a bear and run away, especially if it's already exhibiting aggressive behavior. A bear can run, climb and swim faster than any human. If a bear pursues you nonetheless, make as much noise as possible and try to make yourself look larger by raising your arms in the air. If all else fails, fight back by whatever means necessary. It's actually legal to carry bear pepper spray inside the national park. Playing dead is a last resort.

We urge you to keep all this in mind when you come to visit our zipline Smoky Mountains.